In an art world where chatter is seemingly always high, one cannot help but wonder why one of the best kept longstanding market secrets has been, until recently, the print and edition auctions. Once upon a time, in an art world where estimates were once an indication of what works were actually worth (can you even imagine?), prints were once the proverbial point of entry for many an aspiring collector. Rather than jumping into the deep end of the murky market waters, even the most novice of collectors could acquire works by artists whose names and even more recognizable images could be secured for a fraction of the price of their non-editioned counterparts.

The separation between an aesthetic church and state was merely indicated by a subtle penciled inscription that indicated that the work was, in fact, an edition. Darling, those times have changed. Among all of the art world genres, prints were arguably the most user-friendly in the favored online format of buying during the pandemic. Between their general affordability, their wall power, and the plethora of comparables to substantiate any purchase, prints are one of the hottest sectors in the market at the moment. So much for a secret.

Prior to the pandemic, the print market was wrongly tethered to the grave misconception that prints were a mere revenue-generating-egalitarian-editioned contribution to the marketplace. The greatest affront to this misconception could have been experienced by anyone who walked off the fabulous Artschwager-designed elevators of the Whitney Museum of American Art into the Jasper Johns’ highly anticipated ”Mind/Mirror” retrospective. Immediately off the elevator was an extraordinary 60-foot-long micro-retrospective of all John’s prints dating from 1960 to the present.  Notwithstanding that all of the prints on that wall (nay 1) were from the permanent collection of the Whitney itself, each and every print on that wall embraced and evidenced motifs that Johns reworked, revisited, and reimagined throughout decades of artistic output. The plates that created those extraordinary prints were the site of artistic creativity and proved that prints were a recursive way of working for Johns’. In my opinion, when it came to the importance of prints for the artist, the Cat was out of the proverbial Bag (thank you, Christopher Wool–another great printmaker) once you took in the magnitude of the retrospective’s wall. To that end, it is important to note that some of the biggest collections to come to market in the past few years possessed some of the most extraordinary array of prints, whether from the Harry W. and Mary Margaret Anderson Family Collection, of which each of the auction houses over the years has hosted a sale – with Christie’s hanging both the editions and the unique works on paper side-by-side in their Rockefeller Center Galleries. 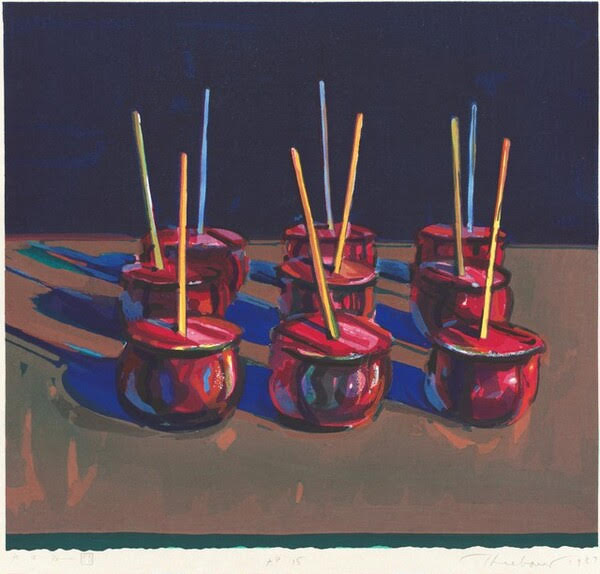 In 2021, Sotheby’s shattered the record for an exquisite set of prints from Jasper Johns from the numeral series from the Collection of Mrs. John L. Marion. In June 2020, during the height of the pandemic, Sotheby’s London had an online-only sale of "The World of Picasso: Including Works from the Collection of Marina Picasso," which presented over 200 works spanning the artist’s entire oeuvre. Tellingly, 188 of the works found buyers—many of them soared considerably over-estimate at a time when the world was at a proverbial standstill. The sale beautifully and intentionally illustrated the direct corollary between Picasso’s genius and his body of works irrespective of being a print, a work on paper, ceramic or silver plates.

While I do not purport to be an Art Detective (that role is already taken), for the purpose of this article, I picked the extraordinary brain of Cary Leibowitz, Deputy Chairman and Worldwide Co-Head of Editions at Phillips. If you don’t already know him, please do make the time to do so. There is not a single auction that we have participated in that goes without his expert counsel, with him imparting wisdom on the technical innovations of prints where we gain a better understanding of the artist’s working method through their print practice. I had the opportunity to sit down with Cary a few weeks ago before the auctions in order to discuss the market. Much like a clairvoyant reading market tea leaves, Cary mused that he expected the trend to continue whereby seasoned collectors who have relied on estimates as the bellwether for the value for the print will be outpaced in a market where buyers are no longer relying on estimates to define what they are willing to pay.

Whereas the much-abused adage of “Death Divorce and Debt” has driven general frenzy behind auctions for the Print market, Cary noted that the driving impetus is the three C’s: “Color, Condition, and Connoisseurs.” In hindsight, to quote the Phillips Press Release published immediately after the sale, “the market for editions is truly international and robust. Collectors from across the globe, comprising 43 countries, participated in our three-day auction where there was spirited depth of bidding throughout. 20th-century masters led the sale, with pop art icons performing particularly well, as Warhol's Flowers (F. & S. 64-73) realized $1.48 million, becoming the highest value work sold in the department’s fourteen-year history. We are pleased to have set 46 world auction records during our Evening sale. It was also an honor to sell all 10 works from the prestigious Harry W. (Hunk) and Mary Margaret (Moo) Anderson Family Collection, which totaled over the high estimate and achieved new record prices for five Wayne Thiebaud works. Additional records were set in the Day sessions by Picasso, Fontana, Calder, Walker, Opie, Condo and Longo.” You read that correctly: Out of 103 lots, 46 world records were set in a Multiples evening sale.

One last notable commentary is that prints continue to go mainstream. Please note that given that Christie’s is the only auction whose May sales were published online at the time that this guest author blew past their already extended deadline (ed. note: hardly!), the observation that two prescient sellers are offering Warhol prints coming up in their Day Sale, including the full set of the Warhol Marilyn prints, estimated at $1,500,000-2,500,000. They additionally have a single print of the Marilyn Monroe that’s similarly hued to the Amann's $200m Shot Sage Blue painting. Phillips sold another work from this similar edition Marilyn just last week for 3x its low estimate and a record price for this print. So yes, it appears that savvy consignors have been cc’d on the memo that Andy Warhol is poised to have a massive season, and that like Picasso, and arguably all the great artists, there is a direct correlation between the artist’s genius and their prints.

Closing arguments? Notwithstanding that earlier this year, even David Zwirner had a spectacular showing of unique prints published by Two Palms that featured works by Cecily Brown, Elizabeth Peyton to Dana Schutz, or that the Whitney celebrated the heroic prints of Julie Mehretu in their recent mid-career survey, showing the importance of printmaking to the practice of some of the most sought-after artist’s today. If that is not enough, speaking of mainstream, even the offices of the hit show “Billions,” known to show off simulacra of blue-chip paintings, prominently displayed Kara Walker’s extraordinary Emancipation Approximation Scene #18 (from an edition of 20) in attorney Kate Sackler’s new swanky digs at Prince Capital. Pay attention to those print sales, I tell you: The window of opportunity for editions is closing swifter than that gavel can hammer it down.