The Evolving Works of Paula Rego, Master of Power & Politics

Powerful, beautiful, unsettling, the Paula Rego retrospective at the Tate Britain is one of the best exhibitions I’ve seen since returning to London. I’ll be honest – it’s not the kind of work I’m usually drawn to and I didn’t expect much from the show before I arrived. But as you might imagine, Rego’s work began to grow on me as I passed through each room. Her arc is complex, yet strikingly clear, with a focus on politics and power that translates between each new body of work, from early collage abstractions to more recent pastel portraits. The profound themes embedded in each work really struck me and I ended up spending hours at the exhibition soaking it all in.

Over her five-decade career, Rego explores countless themes, yet they all discern one defining characteristic: power. Rego’s work challenges authority — shedding light on the abuse of power and exploring the dynamics that keep some at the top, and others at the bottom, of society. With subject matter that spans war, media, and sexual politics, Rego’s work is constantly questioning and confronting the establishment. Rego’s focus on the abuse of power is no coincidence; she grew up in Portugal under the fascist regime of dictator António de Oliveira Salazar (a contemporary of Hitler, Franco, and Mussolini). Salazar’s oppressive government loomed over Rego’s childhood, cultivating feelings of anxiety and vulnerability that follow Rego throughout her life. Art is Rego’s means of escape from the reality of political uncertainty, an outlet for her creative and progressive mind. By the time she is 16, Rego moves to the United Kingdom where she is free to pursue a career in the arts and challenge Salazar’s government through the language of painting. Eventually, her work grows beyond the political climate in Portugal, but her intense childhood lays the foundation for Rego’s entire practice. 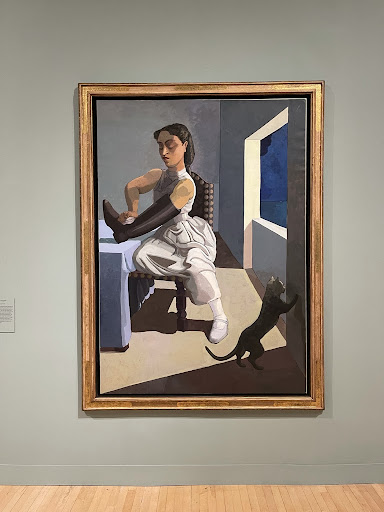 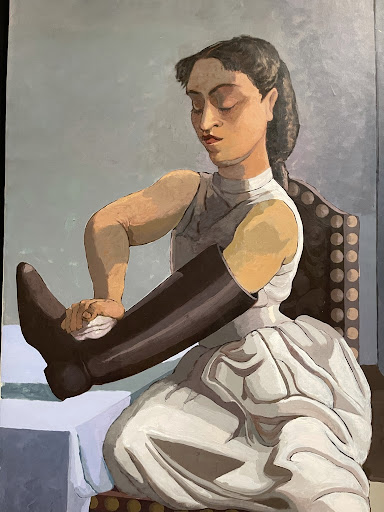 In this work, The Policeman’s Daughter (1987), Rego depicts a young girl in her home, dutifully polishing her father’s military boot. To fully understand this work, we must acknowledge and decipher the symbolism within the frame, beginning with the boot. The boot signifies the power and authority of the police state, perhaps also representing the government as a whole. Moreover, the image of a stomping boot evokes a sense of oppression and abuse of power. In this specific work, the boot might also reference the paternal power of a father over his wife and daughter, the unbalanced gender dynamics of the domestic sphere. The daughter is carrying out the mundane and unglamorous task of cleaning and polishing her father’s boot, an activity we can presume is below him. The girl’s expression is passive, almost empty, offering little, if any, sense of personal agency – it’s almost as if the regime has successfully eradicated her sense of individuality, making her yet another cog in the fascist machine. Here, Rego exposes how power and corruption can pervert and conquer innocent people carrying out commonplace activities. Rego also wants us to ask questions about collaboration. Is the girl equally to blame for her father's actions? Can she also be held responsible for the regime’s crimes? It makes me wonder, if her father is a Nazi officer, do we consider her complicit in his actions? In contrast, this painting can also be read as optimistic and empowering. A wall text in the gallery suggested the way Rego’s young protagonist inserts her arm into the boot could be sexually suggestive. Perhaps this confident insertion of her arm into the boot represents an attack on the patriarchy through women’s sexual empowerment. Even so, the girl’s obedience in serving her father and those in charge suggests she hasn’t yet reached her own personal liberation, leaving us with feelings of tension and uncertainty. 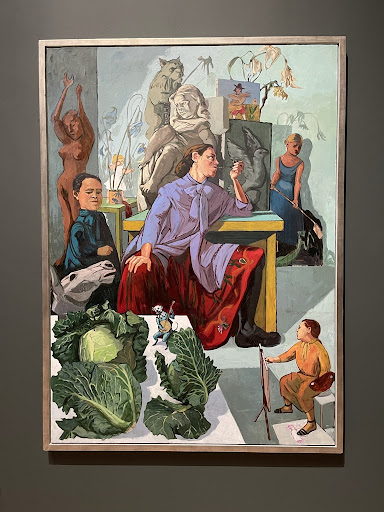 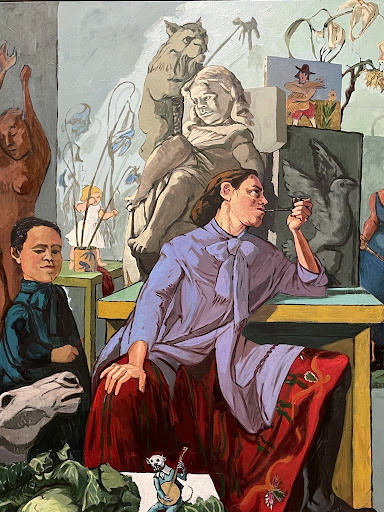 The Artist in her Studio, 1993, acrylic paint on canvas, Leeds Museum and Galleries

Another favorite was Rego’s 1993 self-portrait, The Artist in her Studio. Borrowing from a number of art-historical moments, the objects surrounding Rego reference vanitas paintings – symbolic still lifes contemplating the passing of time and the ephemerality of life. Moreover, Rego’s deliberate choice of setting and dress is an allusion to the status and power conveyed in many artists’ self-portraits. Rego has said this work was inspired by the nineteenth-century novelist George Sand, who famously went by a male pen name and wore men’s clothing in public. Like Sand, Rego plays with gender conventions by depicting herself with her legs confidently open (yes – manspreading) and smoking a pipe. The work is not only a beautiful homage to Sand, but also a commanding self-portrait that conveys Rego’s own personality and motivations. The passive, expressionless girl seen in The Policeman’s Daughter is gone, replaced by a powerful, self-assured woman. Rego does not meet the viewer’s gaze; she refuses it, conscious of our presence, but unbothered and unconcerned. Instead of presenting herself as a beautiful seductress, Rego assumes the role of a woman in power, while subverting the art historical representation of empowered women by the male gaze. In other words, Rego does not need her sexuality to be powerful, instead she reveals a deeper source of agency and power by denying the satisfaction of her attention or a chance to objectify her nude form. It conveys a F-you to the viewer. Her stance is solid and athletic, almost like a statue, impossible to throw off balance or knock down. Ultimately, this work represents a physical and psychological reinvention of the powerful woman, subverting the notion that women are only revered for their beauty, while men are valued for their strength, skills, and intellect. 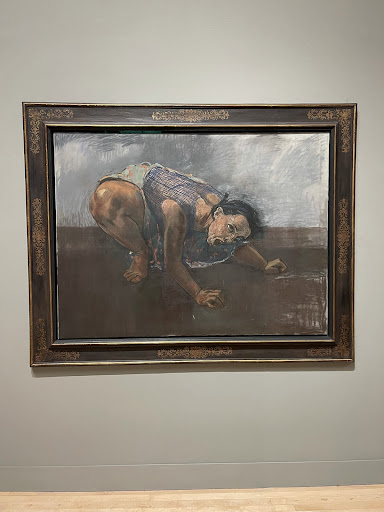 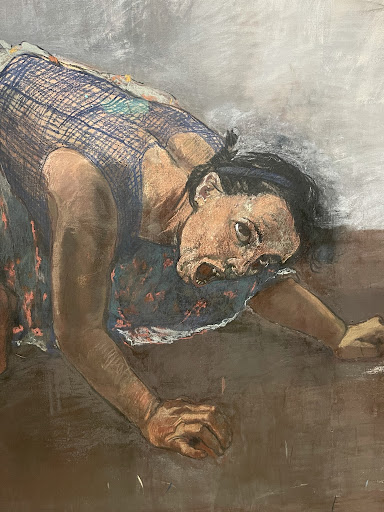 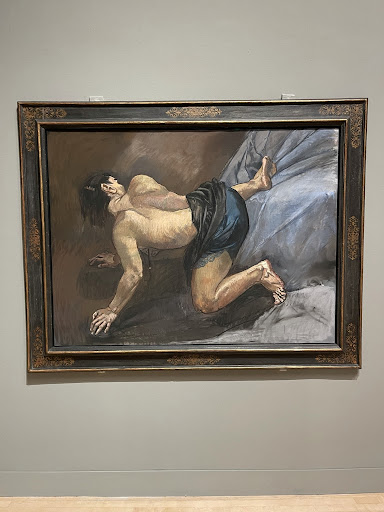 The following year, Rego embarks on a new series of works, dubbed Dog Women, in which she depicts women in various animalistic poses. These works mark a continuation of Rego’s exploration of female identity and sexuality, building on the themes illustrated in The Artist in her Studio. Nothing is idealized in Rego’s depictions of women – they are physically powerful, yet in pain, tortured, and/or needing an escape from their bodies. If one thing is certain about Rego’s Dog Women, it’s that they do not cater to the male gaze. They are not beautiful, but rough and dirty. Not skinny, but solid and strong. Rego explains, “To be a dog woman is not necessarily to be downtrodden; that has very little to do with it. In these pictures, every woman is a dog woman, not downtrodden, but powerful. To be bestial is good. It's physical. Eating, snarling, all activities to do with sensation are positive. To picture a woman as a dog is utterly believable.” Rego’s Dog Women also speak to overwhelming primal needs and emotions that all humans experience but often keep bottled up because they defy the social constructs that dictate our modern lives. These works also mark an important material transition in Rego’s work. In 1994, she begins to work with pastel as her primary medium. The ability to paint with the pastels directly in her hand creates an immediacy, bringing Rego physically closer to the surface of her canvas. Moreover, pastels are built up to create more texture, allowing for rougher surfaces that convey the rugged nature of her Dog Women. As Rego herself says, “the [pastel] stick is fiercer, much more aggressive.” 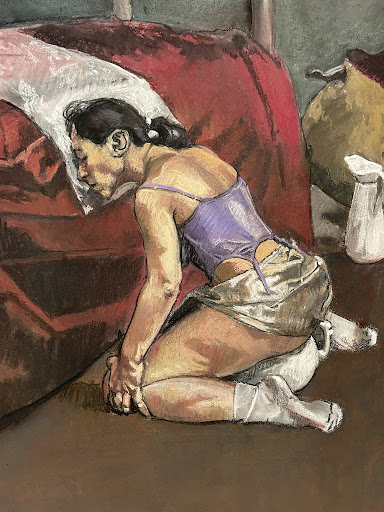 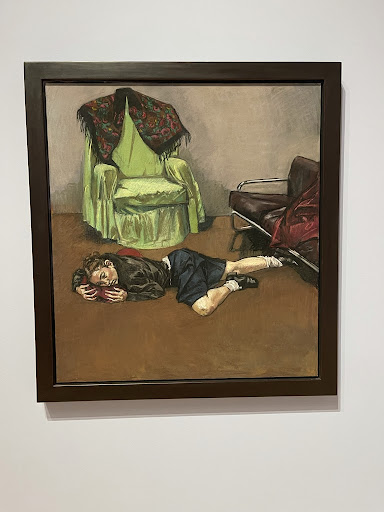 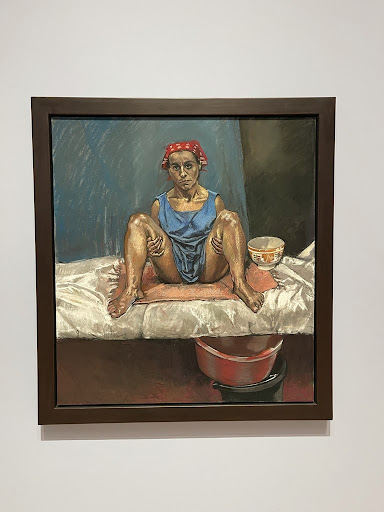 The works that proved the most moving in the exhibition are the pastel portraits depicting women in the aftermath of abortions they had to undergo illegally. In 1998, Rego begins to make these works in response to a failed referendum to legalize abortion in Portugal. Although their subject matter is extremely specific, these paintings encapsulate Rego’s entire oeuvre, challenging the very real authorities over women’s bodies: Sexism, patriarchy, and sexual abuse; religion; and political and governmental law. The haunting images Rego creates in honor of these women — bodies contorted, crying, faces in pillows — reveal the unimaginable damage modern society is capable of. However, the woman in the final painting faces the viewer, meeting our eyes, crouching on her bed with her legs open. To me, this work encapsulates Rego’s defiance of authority and desire to upend harmful social power structures through art.