A Sojourn into the World of Artist Cristina BanBan

After a long summer of meeting artists and exploring their studios, one of my most memorable visits was to Cristina BanBan’s space in Brooklyn. It was here that I got to see a new group of large-scale paintings she had been working on for her debut show in Shanghai, Melancholia, on view until October 23rd. It was my first in-person encounter with BanBan’s work and speaking with her helped me learn firsthand about her process and evolution as an artist. 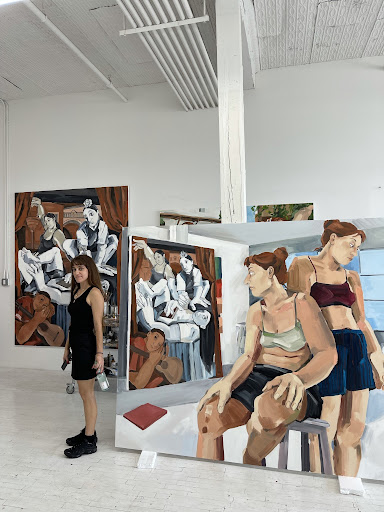 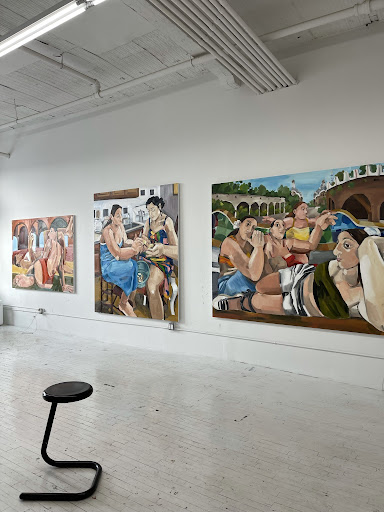 Born in Barcelona, BanBan worked in London before recently moving full-time to New York City. Steeped in a unique cultural backdrop and rich art historical legacy, all three cities have left a mark on BanBan’s practice and contributed to her evolution as a painter. Moreover, the Covid-19 pandemic pushed BanBan to explore new subject matter as she reflected on her friends, family, and home while quarantining in New York City.

BanBan’s new body of work includes a series of large-scale portraits depicting scenes from her everyday life, intimate paintings of friends and family, and contemplative self-portraits. These new paintings waver between the real and the imagined, candid and constructed. In 2021 we are perhaps more distant from each other than ever — physically, socially, politically — but it seems BanBan’s paintings are working to pull our worlds back together. Working both from life and memory, BanBan stitches together different figures and settings to create an escapist vision of a post-pandemic world, yet one still firmly grounded in her own lived reality. For the viewer, the prospect of standing face-to-face with BanBan’s imposing (and maskless) figures restores the feelings of intimacy and humanity that were lost over the past two years.

Because these new works are being shown in China, BanBan was not allowed to depict nude figures. For an artist whose work is so deeply engaged with themes of intimacy, sexuality, and the female body, this kind of regulation might seem like a major obstacle. However, having to work around this new limitation pushed BanBan to expand her visual language and rethink her approach to the painted figure. Through the subtlety of line and surface, BanBan is still able to charge these new works with energy and emotion. Her thoughtfully constructed compositions evoke art historical motifs and challenge the viewer’s perception of what is real and imagined. Amazingly, the striking intimacy of her early nudes is stronger than ever in these dynamic new paintings. 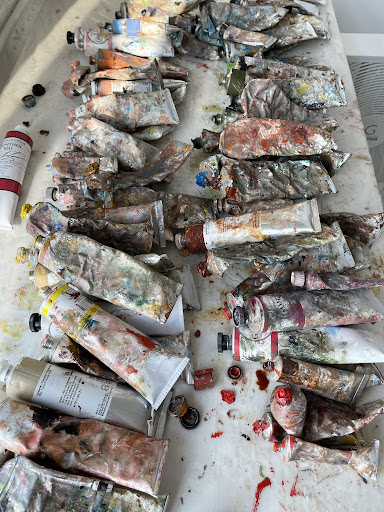 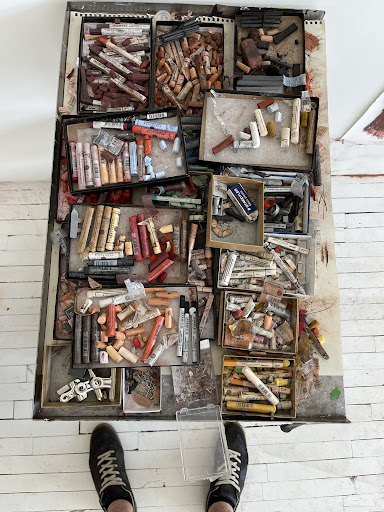 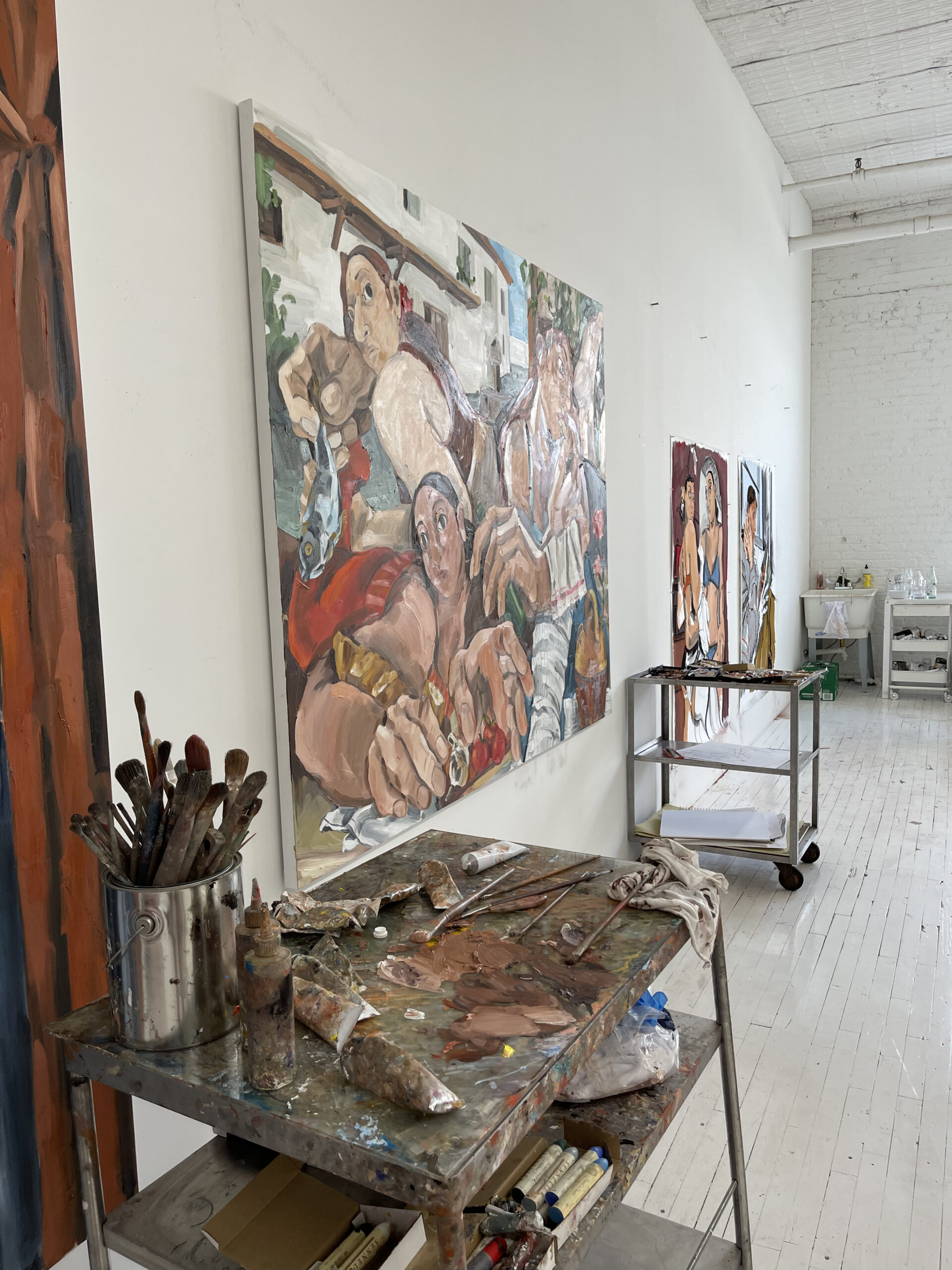 One way in which BanBan injects new life into these works is her recent shift from acrylic to oil paint. This material shift allows for a highly textured and fleshier surface, resulting in a more painterly feel that helps to evoke the intimacy and sexuality of her subject matter. Using oil has also presented a new challenge for BanBan: her brushwork is more apparent on the painted surface, leaving a trace of both intentional and unintentional mark-making. Accepting the imperfect nature of oil paint has been a major challenge while transitioning to the new medium, according to BanBan. Moreover, the slow-drying nature of oil paint forces BanBan to spend more time with each painting, allowing for an evolving relationship as she spends days and weeks working on each piece. 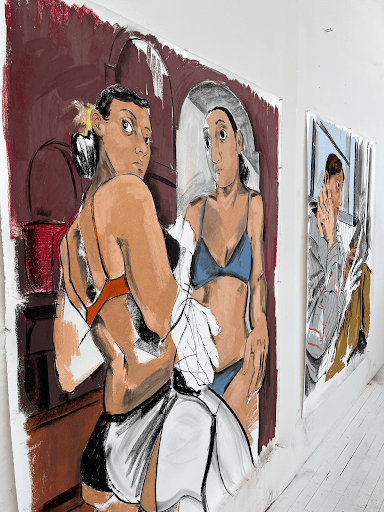 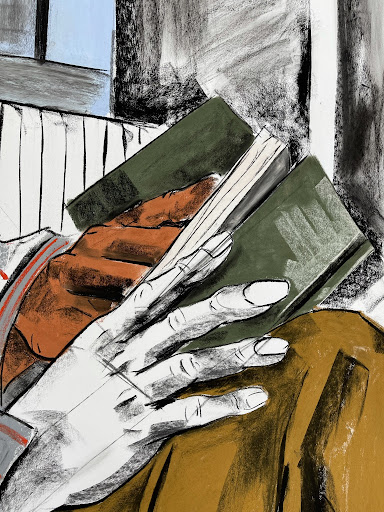 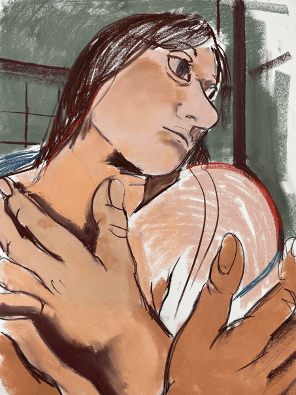 Another new aspect of BanBan’s practice has been the incorporation of pastels and charcoal into her process. In her works on paper, such as Summer House, Poema Sin Salida, and Candela, the line plays an important role in her construction of figures. The bold mark-making offers the viewer a glimpse into BanBan’s process. BanBan's presence in the work further emphasizes these feelings of intimacy and physicality that are so central to her practice, while the sensual nature of the line offers an erotic flair that makes up for her inability to depict nude figures. Even the physical dynamic of working without a brush pulls BanBan closer to the surface of her work, creating a more intimate relationship between herself and the painting. 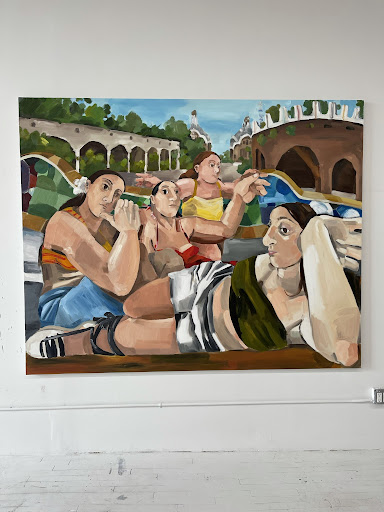 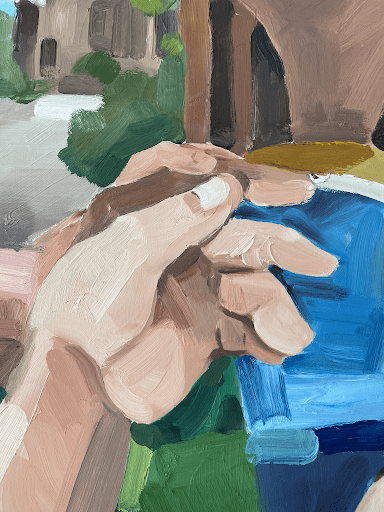 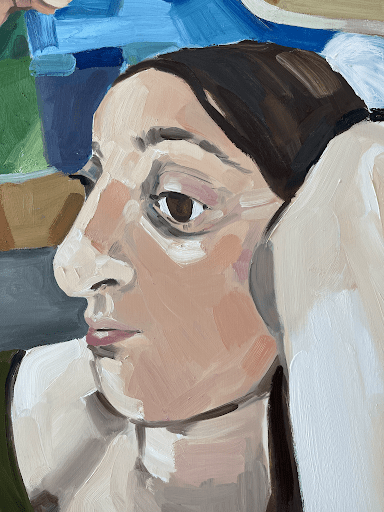 In one large-scale painting, titled Le Déjeuner at the Park Güell, BanBan positions her figures in reference to Manet’s 1863 painting, Le Déjeuner sur l'herbe. However, rather than a mystical forest, the painting is set in Antoni Gaudi’s Parque Güel in Barcelona — both an art historical reference and an homage to BanBan’s Spanish hometown. And while in this work the figures are imagined, BanBan sometimes depicts her own friends and family as subjects, further blurring the lines between the real and imagined. Moreover, in this work, as well as many others, the figures are pushed into the foreground, almost spilling out of the canvas and into our space. This compression of space emphasizes the imposing shape and scale of BanBan’s figures, making them feel as if they are part of our world, despite their animated, almost cartoonish features. 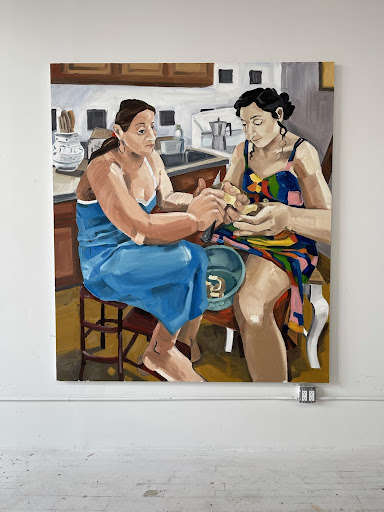 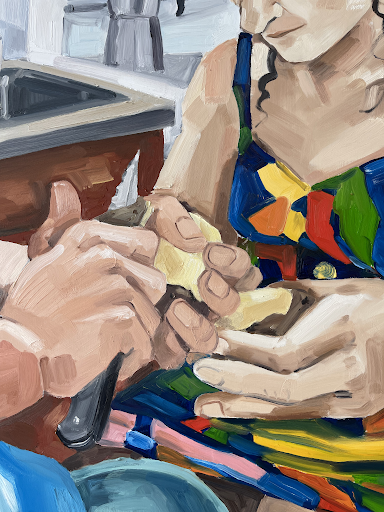 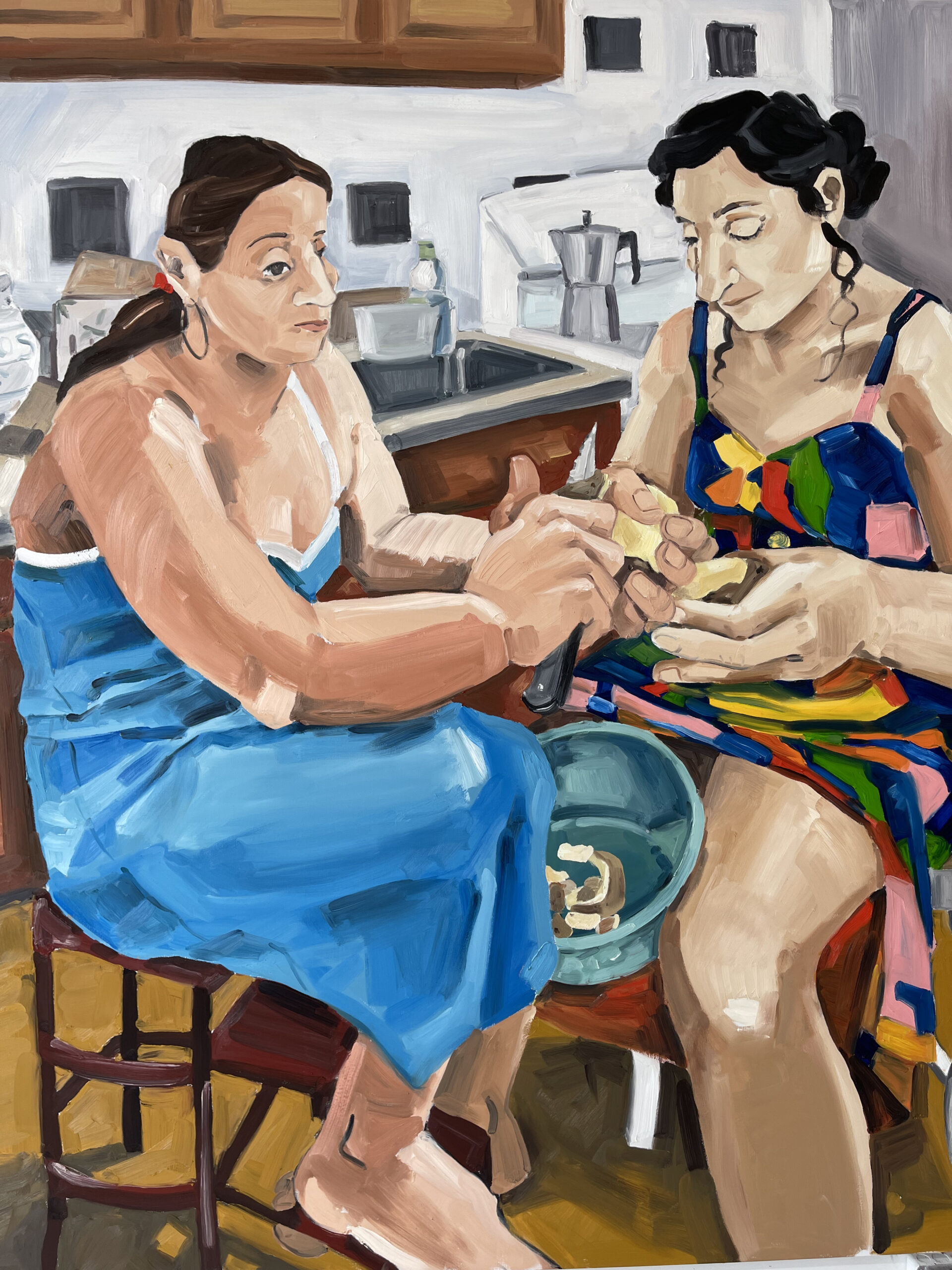 In another work titled, Irene and Sara Peeling Potatoes in Greenpoint, two women are depicted peeling potatoes in a kitchen. The work captures a mundane everyday moment, perhaps alluding to the domestic role of women in society. The woman on the right seems to be smiling, happily consumed in her domestic task. The other woman, however, looks outward with an empty expression. Maybe she is bored, or, perhaps, sad. Regardless, it seems she would rather be somewhere else. When I first saw this painting, I assumed it was set in Spain, in part because of the colorful dresses that echo the lively architecture of Barcelona seen in other works. I also associated the activity of sitting in the kitchen with friends and family while peeling potatoes with a knife, as something distinctly Spanish. I even showed the work to a friend from Madrid and she said it reminded her of her childhood and preparing traditional Spanish dishes in her grandmother’s kitchen. She even said she could smell the painting from her screen! Interestingly, though, it turns out the work is actually set in Brooklyn, where BanBan now lives. The figures are her Spanish friends, so I read the painting as an attempt to hold onto her culture and traditions even as she lives on the other side of the world. In this sense, BanBan’s work explores her hybrid identities and the struggle of holding onto one’s heritage as an immigrant in a foreign place.

The way BanBan crops her vignettes is almost photographic, making her paintings feel like a documentation of everyday events. It’s as if she carries a polaroid camera wherever she goes, capturing different moments throughout the day. But the art historical staging of these paintings contradicts this candid feeling that is so apparent in BanBan’s work. The contrast between the more candid works and the highly choreographed art historical paintings results in a compelling dynamic. What is real and what is not? To what extent can we trust painting as evidence of a single moment? We face these same questions in real life as well as in BanBan’s paintings, particularly on social media, where the line between real life and a constructed image is more blurred than ever.

These new paintings on view in Shanghai also offer a glimpse into the evolution of BanBan’s figurative style. Her subjects are constantly evolving in each new body of work, most recently from voluptuous and highly animated figures toward classical, almost sculptural forms. In art historical terms, I would say she’s moving from a Rubenesque style of depicting the female body to one reminiscent of ancient Roman sculptures and frescos. Although seemingly skinnier than her past figures, these bodies are imposing and large, commanding a tremendous sense of weight, as if they were carved from stone. This weight gives BanBan’s subjects a unique sense of agency and authority, commanding the picture plane and denying the viewer’s objectifying gaze. In other words, these women were not painted to be sexualized, but rather respected and admired. Some look out beyond the canvas, few directly meet our gaze. BanBan’s figures are contained in their own safe space, self-assured and confident. Many of her earlier works were crowded, with figures pushed into the foreground and jumbled together in an almost claustrophobic arena. This new body of work takes a step back, both literally and figuratively, capturing the painted world through a new lens. With more space to breathe, BanBan’s figures feel grounded in their world and our own. 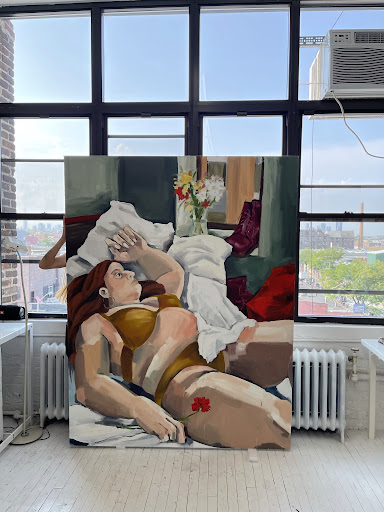 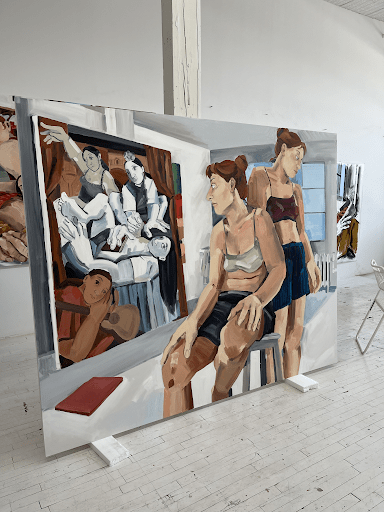 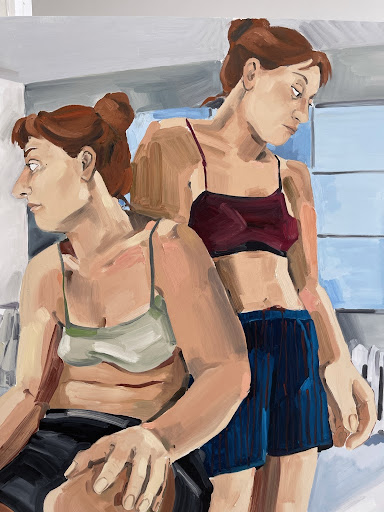 To top off the show, there are also two stunning self-portraits. In one of these works, titled Las Dos Caras de una Misma Moneda, BanBan depicts two images of herself standing side by side in the studio. In the other work, 24 Little Hours, BanBan paints a voluptuous, plus-sized version of herself laying on a bed. In both works, BanBan seems to be alone in her thoughts. To me these paintings capture the melancholy and loneliness of the lockdowns we all experienced, offering a sort of universal digestion of those moments we all endured. Also, both self-portraits are explicitly altering reality. Perhaps they represent a fantastical imaginative space, one which BanBan seeks to escape to while she is painting.